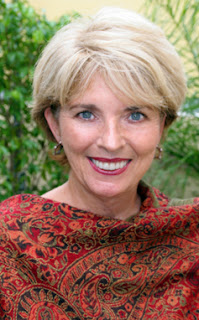 Our visit to First Unity of St. Petersburg was spectacular! On Saturday, the church's Wings Bookstore hosted a book signing for My Lovely Bride and her spiritual books. On Sunday, Rev. Temple Hayes, First Unity's beautiful and inspirational Spiritual Leader, introduced Suzanne at both services. Temple had previously interviewed Suzanne twice on her weekly Unity Radio program, and it was obvious that they clicked. 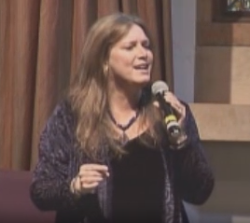 Just before Suzanne presented the message, the church's pianist, Jeff Snyder, and singer Jane Talbot had a song to perform... not just any song, but If Not For Love, by Karen Taylor-Good. As many of you know, this was the theme song that ended Messages of Hope - The Documentary. 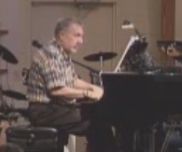 We were both stunned, and Suzanne almost broke down in tears. What made this Extra Special was that there is no published musical score for If Not For Love. Jeff and Jane had contacted Karen and J.D., the writer of the score, but all they had were a sheet of chords. Jeff and Jane then spent hours writing out the notes and practicing until it was perfect as a special surprise for Suzanne. It set the tone for the entire day at First Unity.

Even Your Faithful Correspondent didn't know what Suzanne was going to talk about, and the message was very well received by the First Unity community. You can watch the video of the first service at http://www.firstunity.org/index.php/services/online. (Suzanne begins speaking at the 30 minute point). On Sunday afternoon, Suzanne gave her Heart Gifts presentation to a large, enthusiastic group in the First Unity Sanctuary. As in previous talks about an amazing young man named Wolf, the audience was visibly moved by her story. After the presentation, Temple and her partner Barbara took us to dinner, where Barbara and I found out we were almost neighbors growing up in New Orleans... it's a small world! Regrettably, my aged Nikon camera died that evening, and I lost all the photos of the day's events. Sigh...

Back in The Villages, we heard from our good friend, Terri of the Frozen North. Terri commented that at a spiritual workshop, she had met some kindred spirits "from Iowa, of all places..." In fact, my family had a dairy farm in central Iowa, where I spent two delightful summers learning how to milk cows, and that was sort of a spiritual experience.... (Please, no wise cracks about you-know-what, Terri!)  Iowa is a lovely state, far less frozen during the winter than Terri's home state of Minnesnowta, and the Hawkeyes used to claim that they had one of the best basketball teams in the country. Evidently they also have a burgeoning spiritual community, perhaps less well known than that of their northern neighbors... letters from outraged Iowans may be directed to Your Gloating Correspondent for forwarding to Miss(guided) Terri. 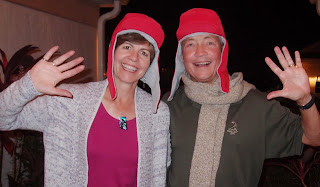 Last night we were invited over to our good friends Connie and John's for a meal. Before I tell you about the meal, let me note that John is from North Dakota, where Devil's Lake is currently frozen over with 8 inches of ice. That makes North Dakota marginally more "Frozen Northish" than its neighbor, Minnesnowta. So, we figured we had better be prepared for cold weather when we drove over to their house in the far northern part of The Villages. Here we are, properly attired for a North Dakota winter dinner... er, lunch... 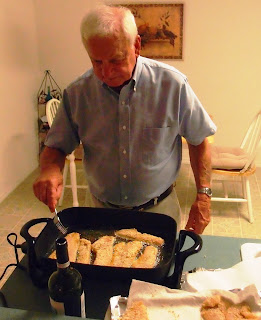 Okay, back to the meal, AKA "Shore Lunch". For those of you who noted a discrepancy between "last night" and "lunch", we must tell you that John's summer home is on the aforementioned Devil's Lake, and he actually caught, cleaned and fileted the walleye that were to be our dinner. John's tradition is to go out in a boat in the morning and catch the fish, then have fried walleye for lunch on the shore with baked beans, coleslaw and new potatoes. Since we couldn't make the trip up to Devil's Lake tonight, he opted to have us over for a North Dakota fish feast in The Villages. Here is John tending the walleye (lightly breaded with a secret North Dakota/Japanese Panko recipe) cooking in the fryer. 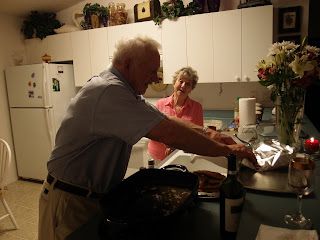 The walleye (as well as the sides) was fabulous, as was the chocolate graham cracker torte dessert that Connie prepared. They (and the starters) went very well with the Argentine Malbec and French Nouveau Beaujolais wines that John had selected; accompanied by a Sibelius concerto on the turntable (okay, maybe it was an iPod).  John and I even got to trade sea stories; he had served on a Navy destroyer as a youngster, as had I. It was a perfect evening. 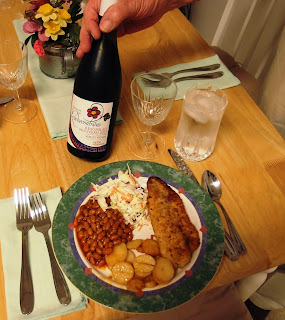 Viewing this picture as the blog went to press late last night, My Lovely Bride said, "I'm ready for that meal all over again!" My reply: "Sweetheart, we have to go to North Dakota when the ice melts so I can catch some walleye like John did... let's see, maybe sometime in late July..."
Posted by Ty and Suzanne Giesemann at 6:39 PM 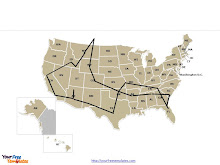 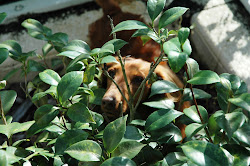 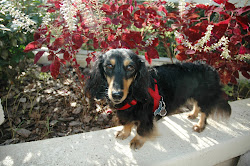 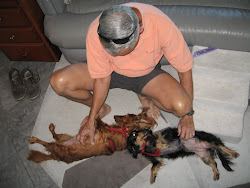